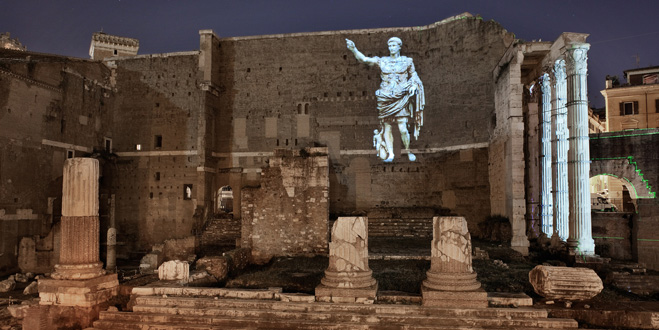 Rome hosts the exhibition entitled “Keys to Rome, City of Augustus” in commemoration of the 2000th anniversary of the death of Augustus.
This unique event will simultaneously be held in four cities: Rome, in the wonderful setting of the Imperial Fora Museum; Alexandria, in the amazing rooms of the Bibliotheca Alexandrina; Amsterdam, in the recently renovated Allard Pierson Museum and Sarajevo.
The four cities symbollizing the “four corners” of the Roman Wolrd, each with a different and varied perspective, chosen for their importance in Roman culture during the Augustian age.
In a great hall, a map of the city will give the visitor the feeling of “walking” within the city of Rome of two thousand years ago. The Forum of Augustus, the Mausoleum, the Ara Pacis and all the other monuments, will “emerge” from the map and tell their own story. Two busts of the great characters of the Roman Republic, will come to life and talk about the strategies and the historical events that have led to the rise of Augustus.

Finally, video panels will illustrate the news on the latest scientific excavations, witnessing the ongoing research and the presence on the territory of archaeologists.

The exhibition will be opened in Rome, at the Museum of the Imperial Forums, until May 10, 2015.

Where: Trajan’s Market, Museum of the Imperial Forums

For those who want to spend a weekend or a holiday in Rome, it’s possible to find a comfortable accommodation on our web site Bed and Breakfast Rome, B&B in central Rome, B&B Rome Colosseum, B&B Rome Spanish Steps.

The Art of Brick, extraordinary LEGO sculptures on display in Rome
At Spazio Eventi SET until 14 February 2015 will be…

Top ice-cream parlors in the center of Rome

The most beautiful beaches in Lazio, not so far from Rome

Where to eat healthy, organic and vegetarian food in Rome

TREVI FOUNTAIN: The real origin of "to flip a coin " tradition